A Doctor of Nursing Practice (DNP) degree with an informatics specialty prepares nurses to lead the selection, implementation, and optimization of information systems to support nursing and interprofessional care, as well as ensure patient access to essential health information.

The DNP program at the University of Minnesota is accredited by the Commission on Collegiate Nursing Education.

The nursing informatics specialty of the DNP program is a three-year full-time program delivered online.

Students in this specialty are required to come to campus once each semester for a four-day session (Tuesday through Friday) that includes: core courses, enhancement programming, specialty courses, and meetings with their advisor. Students also complete 1,000 hours at practicum sites arranged by the school. All other work is completed online.

Applicants who are not US citizens or Permanent Residents should understand that the University of Minnesota’s DNP program does not meet the requirements for eligibility needed to obtain the appropriate F-1 student visa or status because the DNP has limited (fewer than four) face-to-face on-site classes per DNP course. During the application process, we ask that international students use ECE or WES credential services for the evaluations. 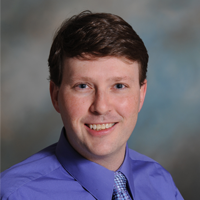 The first time Galen Hamann listened to experts discuss nursing informatics, at a conference he attended while earning his bachelor’s degree in nursing from the University of Minnesota, he was hooked. “It was like gospel to me,” said Hamann. “It made sense to me. The vision of where it was going and the opportunities I saw there made me want to learn more.”

Nursing informatics brought together Hamann’s previous career experience in engineering with his career aspirations in nursing. He was eager to explore the intersection, so he enrolled in the Doctor of Nursing Practice (DNP) program at the School of Nursing in the informatics specialty area. Early on in the program Hamann said he knew he made the right decision to obtain his doctoral degree in informatics. “My first informatics class really validated my choice,” said Hamann.

When Hamann enrolled in the DNP program he had been a medical-surgical nurse at the VA Hospital in Minneapolis. He took on an informatics role at the VA hospital when he began work on a computerized decision support tool for antibiotic prescriptions. He conducted literature reviews to ensure information was up to date and completed usability tests.

Hamann continued to work at the VA while he worked toward earning his DNP degree, and for his scholarly project, Hamann developed an evaluation tool for a national residency program, which is currently being used in more than 30 hospitals. The tool required him to create a database and develop the front-end interface for a tool that was facility specific and permitted multiple users. As a result of his DNP education and knowledge gained through the DNP program, his title at the VA hospital evolved from clinical applications coordinator to clinical informatics specialist.

“The DNP degree is a movement that is gaining speed really fast,” said Hamann. “It is well regarded and I’ve gained new respect from my colleagues and peers.”