The Bachelor of Manufacturing Management (BMM) can help you jump-start a career in manufacturing or make you eligible for a promotion. This major is open to all students but is focused on people already in the workplace. It is a career-oriented program that prepares graduates to supervise a manufacturing process, manage human and mechanical resources within budgetary constraints, and ensure product quality.

All admission materials must be at the Office of Admissions no later than 4:30 p.m. CST on the deadlines noted.

This degree requires 120 total credits, with 34 of those within the major. Here is just a sampling of courses you might take:

With a manufacturing management background, students can pursue positions in such areas as:

Our graduates have gone on to find employment at numerous companies, including: 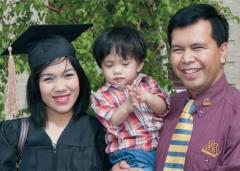 The expression "small campus," might refer to the physical size of the University of Minnesota, Crookston. But for online students, the words "small campus" take on a different meaning. The campus can be located at the kitchen table or a favorite chair in the living room, and it may be across town or across the world.

For 2011 graduate Joe Cretesio, the Crookston campus means a bachelor's degree from the University of Minnesota and a chance to dream. "When you wake up in the morning, you need to have dreams," Cretesio says. "And you need to remember that age is not a prerequisite to attaining a quality education."

His positive attitude has carried him through life even when the going was rough. He attended the Palompon Institute of Technology in the Philippines where he earned a bachelor of science in marine transportation. In 1989 he moved to California where he worked for Toyota Logistic Services, Asyst Technologies, and KLA-Tencor Corporation, where he worked as a test engineer and was promoted to a field service engineer.

His work took him all over the world, including countries in Asia and Europe, and across the United States. Life took what seemed to be the worst possible turn for Cretesio in 2008, when he was laid off from his job and his marriage ended. He moved to Minnesota with his two children and began working at a printing company as a helper for $8 an hour. "At that time, I did not think about what had been in my past; instead, I was consumed with how we were going to survive from day to day," Cretesio reflects.

He decided he needed to move his family closer to Minneapolis, and in spite of the recession, he was hired by a pharmaceutical company as a pharmaceutical manufacturing technician in Eden Prairie. After years of working in the semiconductor industry, Cretesio found himself in a completely new line of work.

Never afraid of a challenge, Cretesio decided he wanted to go back to school and discovered the University of Minnesota offered degree programs online. The bachelor of manufacturing management seemed like a perfect fit, and he was pleased that he could earn a U of M degree. "The people that I worked with at Crookston were so helpful, and I had the support l needed to make the transition to life working full time and attending c1ass," he admits.

He was able to transfer in credits and began working on his degree in fall 2010 and, two years later, found himself at commencement on the campus to which he had been only virtually connected. He praises the help he received from Christo Robberts, who served as his adviser and taught his favorite class: quality management.

"The class in quality management will serve me no matter where I go or what I do," Cretesio says. "It is like a guide and a teacher for me in any path I might follow."

His personal situation changed as well, when he remarried and recruited his wife, Rocben, to pursue a degree online. He understands the life of a working , full-time student, so he is at the ready to give his wife the encouragement and support she needs.

Last October, Cretesio was hired by a biotech company in Chaska as an advanced production technician and is enjoying his new career.

His resume and transcript don't say it, but Cretesio strongly endorses lifelong learning and, one would suspect, this grad will never stop dreaming and reaching to achieve.

Financial aid is available for eligible students. Please fill out the FAFSA form in order to apply, and use code 004069 for this program. For more information on financial aid and scholarships, contact the University of Minnesota-Crookston (UMC):